Oh no you didn’t Nokia!!! Just when society is shouting and moaning about how attached we already are to our cellphones. How distracting our track pads and touchscreens have become, stripping us of the sights of humanity in front of us, catching clicks and texts taking up all our time. Sometimes we go whole days talking through texts without a single syllable spouting from our lips. That’s just the way it is. But Nokia, knowing what’s up with the smartphone sickness, decided to take it to the next level and if you think technology hasn’t gotten under our skin. It’s totally about to. 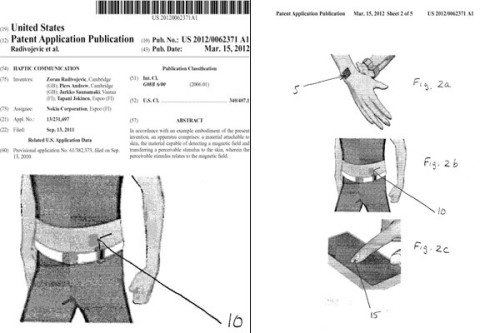 Coming soon, say hello to the smart tattoo. That’s right! Nokia has patented a new technology capable of sending a pulse through ink on the body notifying someone of a call or a text. As the Christian-Science Monitor report puts it, “Such a “tattoo” would be more of a skin graft. Its material would be “capable of detecting a magnetic field and transferring a perceivable stimulus to the skin,” How far away are we from turning this concept to reality? Not really that far off, really. In fact, microchips designed with a person’s medical information received FDA-approval in 2004. In fact, the chip has recently served its purpose in providing medical records to hospitals and doctors at a rapid pace in the event of an emergency.

But is it really all for the better? Identity-theft and privacy-infringement issues aside, what could seem as a godsend in terms of accessibility and upgrade to the art of tattoo could end up backfiring entirely. What if the wrong motion, movement or contact sets off the wrong commands, creating confusion and chaos everywhere? What if you’re out on a date with someone really…really special who could possibly be the one, and then you get a call from your ex about something you left at her place, or because she’s lonely, or because her new guy isn’t really doing it for her and she wants attention and to take her issues with him out on you? Or the worst scenario, what if you’re making love and the significant other rubs the tattoo the wrong way and creates what could go down in history as the most epic pocket-dial of all time.

…And don’t get me started on what’s going to happen should you change providers or if you want to have the design altered/removed. That might hurt a bit…

Newer Making The Most of Your Tattoo Machine
Older UNLEASH YOUR ULTRAVIOLET AWESOMENESS.